A redacted copy of the Terry Report – wdtk pdf download [1] wordpress pdf download  [1a] has been released some time ago in response to a Freedom of Information request [2].

I have been meaning to write a comprehensive account of Kincora but there is so much to do, that I have not managed to. It is now pressing that I bring attention to the release of this Report due to the Historical Inquiry in Northern Ireland and the decision not to include Northern Ireland and Kincora in the overarching child abuse inquiry, which is included in the statement by Theresa Villiers yesterday [9]

The Terry Report was a report by Sir George Terry, CBE, QPM DL, the Chief Constable of Sussex CBE into the “Kincora Boys Home and kindred matters” in 1983.

It was commissioned by Sir John Hermon OBE, Chief Constable of the Royal Ulster Constabulary,  who asked Her Majesty’s Inspectorate of Constabulary (HMIC) to investigate the RUC’s previous inquiries into Kincora. HMIC appointed Sir George Terry, Chief Constable of Sussex. This was announced by James Prior the Secretary of State for Northern Ireland in the UK Parliament on 18th February 1982. 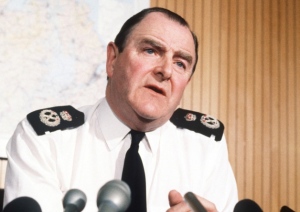 The Terry Inquiry had been commissioned because there had been widespread disquiet, unease and skepticism about the Police inquiries into Kincora and rumours of widespread paedophile rings.

However the big surprise on the first page of the report (000002 of the recently released report)  is that it states that the report by Terry should be read in conjunction with 2 separate reports by his fellow investigators.  Detective Superintendent Gordon Harrison Report covered the criminal investigation aspects and Superintendent Richard Flenleys Report which dealt mainly with the press allegations and background and ramifications. The Terry report was really 3 Reports. It also states that these reports were linked to the RUCs reports of their continuing investigation.

Unfortunately the Flenley Report FOI [10] release has been refused [11]. Similarly the Harrison Report FOI [12] has been refused [13], both after unnecessary delay by the Police Service of Northern Ireland. Both I believe should have been released redacted. However this is the problem with asking an authority to release a report that may contain information of detriment to that organisation. They are reluctant to do so. If anyone has the time it may be worthwhile to ask for these again  and take them to the Information Commissioner. I believe that the Historical review should also release the reports redacted.

The Terry Report was written before the more famous Hughes Kincora Report [6], which was essentially an internal Social Services investigation.

Apologies for lack of timeline and brief article.

The conclusions of the Terry report were released at a joint press conference of the two Chief Constables on 28th October 1983.

asked Her Majesty’s Inspector of Constabulary

which is before the more famous Hughes Kincora Report (3), which was essentially an internal Social Services investigation.

The Kincora Home child abuse, despite abuse going on for over two decades  had first come to widespread public knowledge in January 24th? 1980. This was from reports in the Irish Independent, (xx), Irelands largest circulation morning newspaper. It named William Mcgrath, Joseph Mains and Raymond Semple as perpetrators of abuse in the home. This was followed by a short flurry of other articles in Irish press (Foot)

The RUC carried out a very rapid investigation and detailed investigation or comment quickly doused when charges were formally brought on 26th March 1981 when there was silence in respect of the wait for trial.  Mcgrath indicated he was going to plead not guilty (PF). 28 specimen charges (PF301) The Bill of Indictment is dated 23rd November (SS) and they faced many specimetn charges. It appears there was some legal bargaining and whilst some charges were amended, some the prosecution decided to not prosecute and Mcgrath pleaded Guilty on  11 December 1981. Mcgrath, Semple and Mains were sentenced on 16th December.

Paul Foot  also states p300 that Peter Bone chief architect for the NE ED and LLIbrary Board conviced of 8 charges of sexual abuse of young boys, one of whom was at Bawnmore, A Fire Safety Officer for Nhealth and Safety Board < Robert Dewer also pleaded guilty to 2 charges of gross indecency with same boy from Bawnmore.

2. Terry is a trustee of the privately financed ‘Police Foundation’ formed May
1981 to carry out research and improve the public image of the police.(State
Research June 1981) lobster 1

lobster 4 Still unreleased (as far as I know) are reports on two inquiries. One (Sunday News
29th May 1983), the RUC detectives who probed the Kincora affair, also investigated
incidents at another children’s home. Involved in the homosexual assaults at the
Craigavon Home was a “military intelligence warrant officer.” The assaults on young
boys took place over a two year period. Two, (Times 26th September 1983) alleged
homosexual activity within the RUC. Four men were suspended after Sir John
Hermon, RUC Chief, received a letter believed to be from a former woman police
officer. Investigations centred on alleged activities in West Belfast more than two

Mcgrath was the leader of the pseudo terrorist organisation xxxx