In Tony Blairs self justifying autobiography Tony Blair A Journey, he writes about an incident when Nick Brown was trapped by News of the World “with someone they said was a rent boy”.

“Alistair [Campbell] heroically pursuaded them to run it with Nick coming out as a gay man. The result was that the story turned from a sordid scandal into an honest confession and Nick was saved.”

This story was at the very end of October and begining of November in 1998, as it was a few days after Ron Davies “Moment of Madness”, told to Blair on 27th October.

I do not trust Blair, nor Campbell nor Murdoch/News of the World. What deal did they come to? Brown also thought that his phone was bugged, which is a further factor. Editor of NOTW would have been Phil Hall.

I have no problem with Brown being gay, I do have a problem if the “rent boy” or the “ex partner” was under aged, which for me  in this context would be under 16, and slightly queasy if under 18, whatever the law at the time.  Does anyone know how old he was? 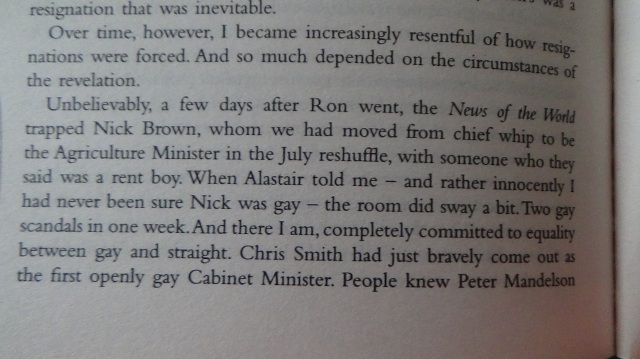 5 Responses to How old was Nick Browns “rent boy”?