The School in the Forest – Angela Brazil

This book is about a year in the life of a girls school in the Lake District in the Second world war, written I think about that time ,1945 , but there is no date of publishing in the book.

What I wished to bring attention to in the book, was that Angela Brazil knew about child migration.

Forced child migration to other places in the Commonwealth, mainly Australia and Canada was “rediscovered” by Margaret Humpreys in the 1980s, see my previous post in  [2]  and the child migrants webpage [3] and Margarets book [4] .

Unfortunately I have not got round to a longer separate post on child migrants, which I hope to in future as it is a hugely important issue, but Margaret also inspired the film Oranges and Sunshine.

However back to Angela Brazil who mentioned child migrants of the times (1940s) on which Angela put on a positive spin for the character involved on page 254.

Later on in the book on Page 272, a character talked about Harriet Martineau, who wrote a book called Forest Game Law Tales, in which she mentioned that young boys could be transported to convict settlements if found guilt of snaring pheasants.  This would probably be back in the 1850s. There are 3 books and all expensive so it would be interesting if someone who had access to the books could say what actually was written. 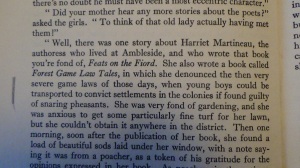 Nothing to do with child abuse, but an interesting feature of the book is the Romany names for some birds and animals. Pied wagtail being a tshiriklo – a lucky bird meaning you are going to meet friends, a magpie being a chal and a hedgehog being a shiwitshi. If it is true then the words do not appear easily on search engine. I would love to know if they are correct.

[1] c.1945 The School in the Forest by Angela Brazil. Published by Blackie and Son Ltd London and Glasgow. Illustrated by Dewar Mills.

4 Responses to The School in the Forest – Angela Brazil