The purpose of this article is two fold. The first is to shine a bit of a spotlight on the abuse at St Leonards Childrens Home. The second is to publish some more police corruption relevant to child abuse and this will come in the second half of the article.

St Leonards was a childrens home in Hornchurch Essex around 1950 until 1985, when it was closed down. It was run for part of this time by Tower Hamlets Borough of London. It was also known as Cottage Homes as it was divided into separate homes of about 30 children looked after by two house parents.

Much of the information in this post is from Paul Connolly’s first book in his autobiography Against All Odds [1] from 2010. The second book Beating the Odds was published in 2014 [2]. For reviews see Goodreads [7]. Paul is now a successful fitness trainer and has a website [3]. There are also articles on him in the press, about publishing his book despite not being able to read until the age of 25,  [6] and topping the amazon downloads chart [8]

There is also information on St Leonards on Operation Greenlight [5]  Needleblog [4]. St. Leonards deserves a great deal more time than I can spend on it.

Paul Connolly was brought up from the age of 8 in St Leonards Childrens Home notorious for its abuse meted out to children. People were sent there in Pauls time mainly from Tower Hamlets London Borough, there were also children from other Councils one being Hammersmith. There was a mixture of reasons for children being sent there. Some children Paul says were “saved” from the street as rent boys in teenage years. Many were Irish or black, both out of place in the Essex countryside, as it was then.

When Paul was there, Alan Prescott was the Head. Pauls house parents were Bill Starling,  and Auntie “Coral” which is a pseudonym. All these were child abusers physically, sexually and emotionally. Paul himself was not sexually assaulted, perhaps because of his aggressiveness to the people concerned, but he did suffer physical and emotional abuse.

Seamus Carroll, was the man who prompted the police investigation, called Operation Mapperton, when he made a complaint to Tower Hamlets about the abuse he says he suffered from four to 15. In the court case in 2001, it showed Prescott had indecently assaulted four teenage boys at various points throughout the 1970s [4]. However he only got 2 years jail.

Bill Starling, had indecently assaulted, raped or buggered 11 victims – aged from just five to 14 – over a 20-year period. He was sentenced to 14 years.

A third social worker, Haydn Davies – who already had a 1981 conviction for buggering a teenage boy and who originally faced 37 charges of indecent assault, rape and buggery – had proceedings against him dropped after the judge ruled the loss of video [from police custody] and other evidence from an aborted investigation meant a fair trial was not possible. He was acquitted of 12 charges. 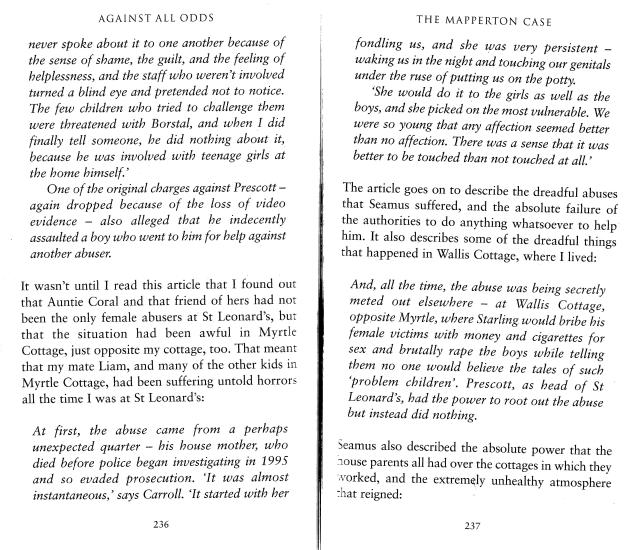 However the abuse was obviously much more widespread. Even Daniel O’Malley, the Detective Inspector who headed the investigation, suggested there may have been as many as 70 victims – with 30 abused by Starling alone [4], but the figures will be far higher, and as well, I have been told that the sexual abuse was happening in the 50’s and 60’s.

Prescott was the Assistant director of Tower Hamlets Social Services, a Magistrate and a Labour Councillor and was a child abuser at St Leonards. Did he visit other homes and abuse? What action did Tower Hamlets take after the court case? What did his Labour colleagues know? Why did he get such a light sentence? How did the Police lose a video tape and other evidence and what was done about this? Did the Police investigate the 50’s and 60’s abuse?

It is only by being part of a  group that you may get the strength and recognition and representation that you deserve. Nottingham and Shirley Oaks have blazed a trail of forming survivors groups and both achieved an investigation by the Goddard inquiry. Help in forming group meetings is available from Voicing CSA [12] eg Voicing CSA Nottingham Meeting [13]

Later in life, Paul Connolly worked as security in brothels. Paul contrasts the East End brothels which were at risk of being shut down, with West End brothels in which the Police either participated or were given backhanders [p147]. He describes some of the clientele of minor royals and MPs, as well as their sexual preferences [p141-6].

The following extracts from the book illustrate police corruption in the West End brothels,  the inadequacy of Operation Mapperton. 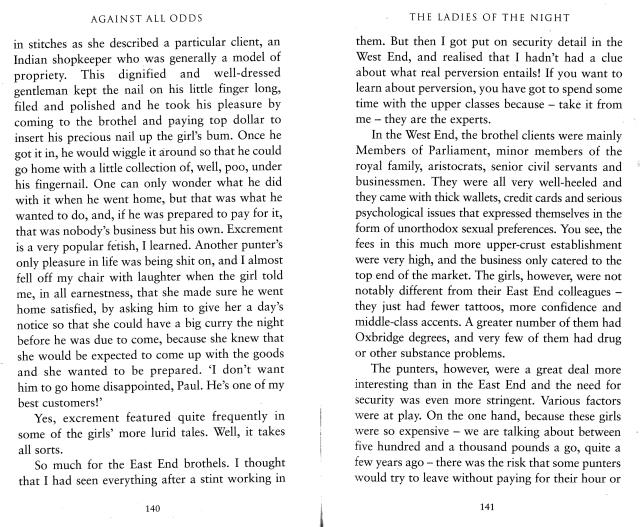 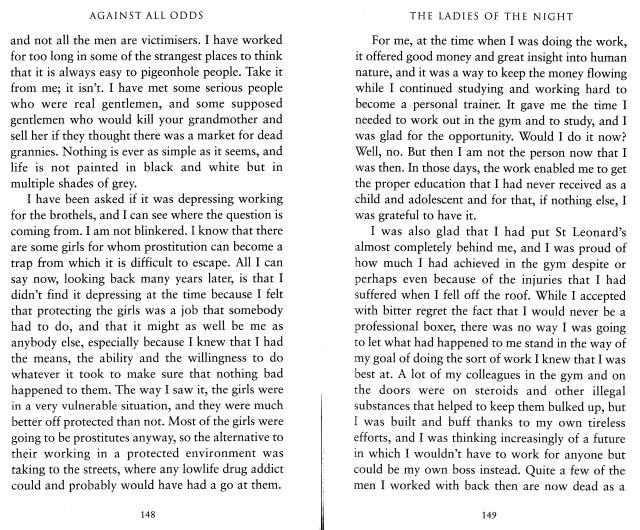 The Police have alot of questions to answer about botched investigations into child abuse.

Added 2016 Jun 29  There is a a 50 page report that Tower Hamlets hold with the title ‘Report on allegations of the abuse of children in the residential care of the London Borough of Tower Hamlets from 1966 onwards’ [14] . They refused to give it to the requestor due to personal information. However I am sure it can be redacted.

St Leonards has also been added to the list of IICSA case studies for the Reparations and Accountability Investigation [15] [17]. As usual the IICSA publicity for this is woeful, and this would have passed me by but for the excellent TED site posting [18]  who also sent me the local paper [16]  as IICSA do not even give the address of which St Leonards and have only added to their website badly,  making it look as it if was a Home in Wales. However there are only 3 days left to apply for core participant status. So be quick!

For the books I provide Amazon links to show details. Personally I try and use Amazon as little as possible due to poor moral and ethical choices the company makes.

[2] 2015 Paul Connolly Beating the Odds – From shocking childhood abuse to the embrace of a loving family, one man’s true story of courage and redemption http://www.amazon.co.uk/Beating-Odds-shocking-childhood-redemption-ebook/dp/B00KVFTADM/ref=pd_sim_351_1?ie=UTF8&dpID=51H%2BaPAa-uL&dpSrc=sims&preST=_OU02_AC_UL160_SR105%2C160_&refRID=03183MWZ3VJ2ZSCPD9P3

[6] 2012 Jan 9 Daily Mail Against All Odds: The debut author who didn’t learn to read until he was 25 tops e-book charts http://www.dailymail.co.uk/news/article-2080829/Against-All-Odds-Paul-Connolly-didnt-learn-read-25-tops-e-book-charts.html

[8] 2012 Jan 5 Evening Standard I couldn’t read until I was 25, now I’m a best-selling author, says trainer to the stars http://www.standard.co.uk/news/get-london-reading/i-couldnt-read-until-i-was-25-now-im-a-best-selling-author-says-trainer-to-the-stars-7304506.html

[14] FOI request to Tower Hamlets https://www.whatdotheyknow.com/request/child_sexual_abuse_st_leonards_c To answer your follow up questions, I can confirm that a 50 page report exists with the title ‘Report on allegations of the abuse of children in
the residential care of the London Borough of Tower Hamlets from 1966
onwards’.

This is all written in good faith but if there is anything that needs to be corrected please email StLeonards@cathyfox.33mail.com