What a morning George!

30th May was a pivotal day in Webb World. This post can only hope to show part of what happened.

In the morning, George named the man he thinks shot Seth Rich – Alpha Jalloh 219.1 [3] Action to be taken is Trump to declassify Seth Rich phone and  laptop and this is the key to uncovering the other scams, criminal activities and the whole criminal network including of course Awans and Hillary, Podestas, DWS, DNC, and of course hundreds of compromised people in power

George says Marvo is being set up to shoot Trump and FBI temporary Director Andrew McCabe was setting up the plot in NZ 219.2 [4]

Then he tries to go to the next task  which is to follow in the shoes of the run of Eric Braverman to the Russian Embassy, which is when Braverman disappeared. BUT he is about to get in the lift and he senses that the people in the lift, complete with muscle man and black bags  are part of a team sent in to kill him, so he goes back to his hotel room and records video 219.5 [7]

Then a phone call with Jason, his recently acquired partner, who is recording a film of events. George tells Jason what he thinks is happening and that a New York comedian called Johnny T is arriving to be with him as they go out. So Jason tapes the call, and videos appear on his you tube channel  [11]

Then it appears Johnny T is not able to get through and this is an incredibly dramatic call to Jason as George realises that he is trapped [12]  He reveals all sorts of things, as he thinks it might be his last moments.

They set up a live video link through periscope. [14] They try and test this but Jasons electronics are blitzed with messages, and and the channel webb4bernie does not appear on a search. George starts drinking wine at ten in the morning, to chill slightly.

George dramatically admits in this call his ties to Israel [ie Mossad]. He makes the distinction between his type, old school Ben Gurion, Mossad, Robert Maxwell type, which George thinks essential to the survival of Israel [approx 4.15] and the new Mossad of new Jewish / Hebrew exceptionalism who kill almost indiscriminately to harvest organs, and have blood diamond ratlines.

He also admits in a bombshell that it was himself who deleted the first 54 videos, as he was getting close too soon to solving things,  and had I think it was too much information about Eric Braverman on there. He now thinks Braverman is in Israel and his mother too, ie Mossad beat McCabe FBI

He thinks Mossad chose Jason Goodman to be his partner,and messed up Jasons business to encourage jason to contact George. Jason is flabberghasted.

Johnny T apparently arrives, George asks him to wave from the car park, but George cannot see anyone. It looks as though Johnny has been intercepted and this is a false message. It looks grimmer for George.

Next video [21] however we suddenly see Johnny in Georges room, a rough diamond, cracking jokes and he pulls out a heavy chain and padlock.

Johnny Big Balls then leads George down the fire escape, and out onto the street to the car, in the car park, still not safe from any goons waiting in cars outside the car park 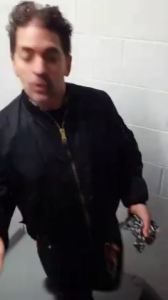 However  in an unexpected twist Johnny Big Balls walks off and explains he has to park his bike legally!

This leaves George alone by his car, goons in their cars about 30 metres away. George mutters” I am dopey. I’m a dope and I don’t know what I am doing.”

The video ends leaving you thinking aaargh what has happened?

The next video, 47 minutes which seems as though there is no sound shows Johnny and George going off in the car. Its a pity if that sound is lost.

The periscope videos are alot of the time  for me very technically difficult to watch. They keep stopping for long periods at a time, its jerky when going,  controls seem not to react, the sound drops out and thats all not including the times that the sound is not recorded at all for some reason. its not user friendly.

There is more, much more, to the day. Jason must have met up with George. They still go and drive to the prearranged Corsi interview, with much spycraft school on the way. George uses their present circumstances to describe how a hit could be carried out. Periscope Drive to Corsis with Jason  [23]

Jason gets increasingly more pale and looks green towards the end, as George uses their present circumstances to describe how a hit would be carried out. George says there is only 1% chance of it being a hit, they have called it off as it is blown.

He does a u- turn on the road and they see a multitude of suspicious looking cars have been following them on this rather off beat road. George is just collecting metdata! You can tell Jason is not looking forward to the interview when they have already announced their position.

Corsi interview not released yet, but there is a video with Corsi released on Seth Rich situation [28]

Anyhow it looks as if the day finished fine as Jason and George have red in their cheeks and reminiscing at the end of the day.

Contrary to what he earlier thought George also thinks kim dotcom might have been  turned, and is going to actually tell the truth, not go along with the cover up.

Anyhow I wanted to get this rough draft out there as it may help some people get some things in order. It was difficult to work out what was happening with the recent opening of Jasons channel and the new periscope channel which was not easy to find or watch.

I may tidy things up later and maybe update parts. Hopefully trish the dish @realtrishdish has done one of her excellent articles by then but so much has happened its all a fog of metadata.

The metacontext of this is George says that the decision has been taken by Kissinger to drop Hillary as the anointed one, the favoured candidate of that part of the powers that be – illuminati? NWO? bloodline? She comes with too much baggage – bodies and violence and trouble and heavy crayon. Favoured person is now Pence.

So this is a shift in world power to a lighter touch deep state? along with the (aided?) death of Brezinski.

However should deep state even be involved in this dodgy business, and is it right Mossad should meddle in the US? Many questions arise about the deep state, but it is good having a window on how this murky world works.

Is George openly acting for Mossad in the US? Is there a battle between two parts of Mossad? What else has George done for Mossad? Was he involved in brownstones? Is he working for Kissinger who most people regard as pretty much evil. Who does Kissinger work for? Kissinger was also in charge of MK Ultra sex slaves.

One thing is certain George Webb deserves credit for shining a light on the dark criminal world of politics and  the deep state. Ratlines – organ harvesting , people trafficking, “brownstone”  operations, and much more.

I do disagree with George, there should be no “ratline lite” and going back to teh old way of doing business, it needs to be stopped and the leaders all locked up.

Is it right that these psychopaths in charge determine our future, is it not time for a complete change to this hierarchical system?

There is a battle between parts of the deep state – probably the CIA is all corrupt ehlping run the ratlines, FBI bosses mainly corrupt , the field agents ok.

Trump is a maverick but is due to necessity aligned partly with the neoconservatives. Despite his many faults and narcissism I do believe he wants to end child sexual abuse and human trafficking but he has the media and most of the corrupt politicians against him.

Periscope videos are already dropping off after 24 hours, as they autodelete. They really need to sort this out and transfer onto a reliable platform for live broadcasts or go back to you tube.

[10] then changes to periscope

[12]  Hillary and McCabe’s Goons are Closing In – Proof of Life From George Webb https://www.youtube.com/watch?v=0p25z-KMXmg 18 mins

[20] periscope https://www.pscp.tv/webb4bernie/1ypKdrXBODgJW? no sound out of window

[21] Johnny with chain walking down stairs  https://www.pscp.tv/webb4bernie/1OwxWAPdkVQGQ? but Goerge miscalcluated ? and Jonny goes off to move his bike, leaving George by his car fortified by some red wine dutch courage ,

[22] https://www.pscp.tv/webb4bernie/1OwxWAPdkVQGQ 47 min video of johnny talking in car no sound

8 Responses to What a morning George!