Not much is known about Trevor Lloyd-Hughes (TLH) despite his importance to the various matters surrounding child abuse.

Here is a summary of what this blog has found to be available on TLH, so far, before I publish a persons story who knew TLH in a couple of days.

Trevor Lloyd-Hughes (TLH) according to the News of the World, was found in the address books of at least two teenage boy prostitutes and also by anti corruption detectives investigating links between gay police and a firm of private detectives. 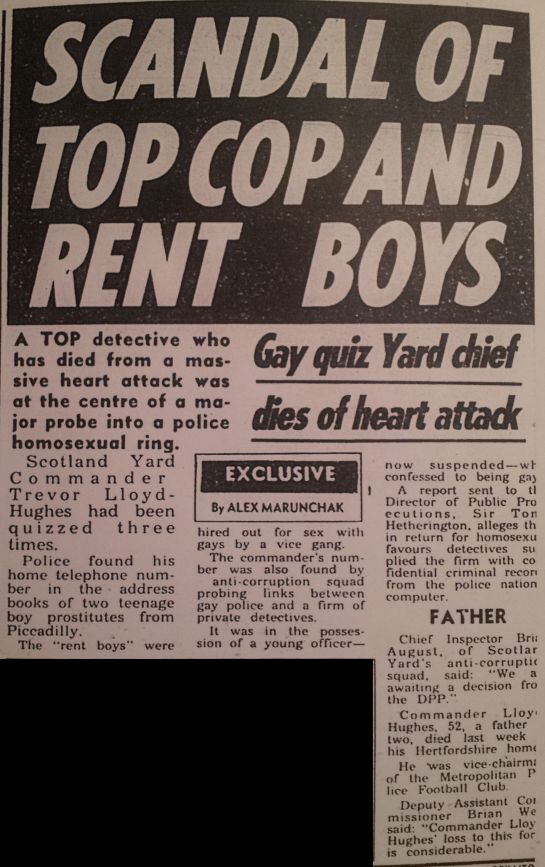 This raises many questions, amongst which are –

Can we trust the NOTW story?

TLH apparently claimed he was not gay, told his solicitors to sue if this was published. He then died and libel not being an option, his wife complained to the IPCC about the NOTW article which appeared shortly after his death. (click to enlarge)

Thus there is conflicting information and also some that may appear conflicting but may be carefully drafted to deceive.

So where do we find the truth?

I am not going to speculate and try and find the truth between a whole bunch of poor quality, conflicted, biased sources and some malevolent actors.

However tomorrow I shall release the story from a person who knew TLH and it throws further light and information on Lloyd-Hughes and some of the issues.

There is also this Mail article from 2016 which covers Lloyd-Hughes – 2016 Jan 23 Daily Mail Scotland Yard detective: I was told to ignore ‘meat rack’ VIPs during paedophile probe [5]

Former Chief Inspector Howard Groves claims he was told to ignore VIPs during a paedophile probe now being investigated by the police watchdog. He believes that the order came from Lloyd-Hughes who the paper says the Operation was led by Trevor Lloyd-Hughes.

This Mail article is confusing, and it invites a few questions.

Was Lloyd-Hughes the senior investigation officer (SIO) for Operation Circus or something else to do with the operation? If so what?

Was TLH pulling strings in whatever form in Operation Circus (Operation Circus in the 1980s was investigating homosexual involvement in child abuse at Piccadilly Circus)….

….whilst being investigated by anticorruption police (who were investigating links between gay officers and a private investigations firm and a gay sex for secrets scandal involving the police national computer)?

Further research needs to be carried out on this.

[11] Bits of Books Blog https://bitsofbooksblog.wordpress.com/1986-90/ Scandal Of Top Cop And Rent Boys (11.05.86) News of the World, 11th May 1986 – Commander  Trevor Lloyd-Hughes (who had written the report on Fagan’s break in just after the Elm Guest House raid but just before the media started to report in August has now risen in rank). His widow complains to the Press Council and it is upheld.

[12] 2015 Jan MET POLICE- RENT BOY RINGS,1986 + SIR DAVID VENESS,PRINCESS DIANA,MARTIN ALLEN  https://www.youtube.com/watch?v=qivK0RBKqoE Commander Trevor Lloyd-Hughes died 1986-his name was in the address books of several rent boys. He was also in the “STOLEN VEHICLES” division. He worked with met police negotiator DAVE VENESS during the 1980 Iranian embassy siege. Veness also worked on the 1979 MARTIN ALLEN disappearance. Veness later worked on security in the royal household,and gave evidence at the 2006 DIANA INQUEST and had close contact with MI5/MI6. He is considered to be one of the “UNTOUCHABLES”. Stolen Vehicles is something that repeatedly crops up in VIP child abuse investigations. Join the dots. Paedophile Sidney Cooke, too.

This is all written in good faith but if there is anything that needs to be corrected or you wish to write to me please email tlh1june2018@cathyfox.33mail.com quoting the article title