Billy Graham who died earlier this year, was a pedophile,a 33 degree freemason,  a member of the Illuminati, a Luciferian who mixed with many satanists and he also programmed Monarch sex slaves.

His front / cover story was a Christian preacher.

I seemed to already know how to do this act, from previous experiences with the SRA [satanic ritual abuse] cult I guess. My childhood pastor was the one who took me to ritual events but in this instance, Billy G was the only one present. I see it as a movie, because I had already learned to disassociate by then.

“I was raped by Reverend Billy Graham in a pink bubble themed cabin at Bohemian Grove. Billy Graham told me his good buddy Richard Nixon had recommended me to him. At Bohemian Grove, I was one of a group of children dressed as teddy bears and hunted for sport by men in the forest, to the theme song Teddy Bears Picnic. I also witnessed the ritual murder of a woman by male guests dressed in black Luciferian robes. 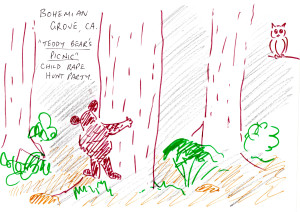 Following that is a brief section about Billy Graham’s son who frequents a place called Voodoo Doughnuts, a child trafficking front.

THE USE OF RELIGIOUS FRONTS
A great deal of Monarch programming and slave abuse, (as well as the drug trade) is done under three major covers or fronts:
Religious Fronts, the Front of National Security and the Military, and the Entertainment fields, especially the Country Western Industry, the Rock Music Industry and Hollywood. The religious fronts were popular for centuries, especially when groups like the Jesuits, the Assassins, and other groups held immense power. Religious fronts are still being used such as J.Z. Knight, Elizabeth Claire Prophet’s CUT church, the Church of Scientology, the Charismatic movement, Jim Jones & Jonestown, and David Koresh’s group etc. Billy Ray Moore’s Lord’s Chapel is entirely a mind-control operation. There is a nondenomination Pentecostal church in southern Washington whose entire membership is Satanists under
mind-control. Various overseas “missionary” groups are covers for the CIA & mind-control. It would take a book to explain how these religious fronts are part of the total trauma-based mind-control and how they operate to protect mind-control, however there are publications which go into some of the CIA connections to these groups. It is suggested that interested persons read these publications. Some of the deceptions such as the lone assassin idea have been used for centuries as a cover for assassinations planned by the occult hierarchy. If we are going to really reveal how the Monarch Mind-control is done,
we will have to explain how the deception is done. If one describes a chameleon only by saying “it is like a lizard”, without mentioning the camouflage, then the most important part has been overlooked.
Religious fronts are an important part of the Illuminati program for making slaves. In fact, due to their gnostic philosophy of balancing their good deeds with their bad deeds, it is almost essential to have a religious front through which one can do good deeds. Even though adding this section to the book will spur some to blindly lash out at the book, still the whole story needs to come out. When we, the authors of this book, write that the Monarch-type total mind-control threatens everything this nation stands for, we
are not exaggerating. The Monarch Mind-control program has not been used just to program slaves–but it has been part of a much bigger deception. When this deception is realized by this nation, it will shatter the very fabric of trust that Americans have in their institutions. If Americans will begin to understand the power structure behind their institutions, and who controls this structure, they will begin to see the lies in the scripts that they have been fed since infancy. And YOU, the reader of this next section in this book, if you love the truth, can help begin the healing process to overcome some of the devastation that is going to rock this nation when the truth comes out. This next section will help both Christian and non-Christian reader. The therapist can learn about what is happening so that they can better deal with what the SRA survivors are beginning to reveal. The grooming of the American people to believe massive amounts of
lies did work, UNTIL a few loving therapists, ministers, and doctors began to liberate victims of the Monarch trauma-based mind-control. These programmed multiples began revealing a horror story of deception unparalleled in history. For the reader to deal with the next section means courage. It means that the reader will have to muster up some of the same type of love of truth that the mind-control survivors must muster to free themselves of the lies of their satanic programming. What we see and hear
can be programming, in the same way SRA victims are deceived. Everyone in the Illuminati of any significance has participated in grooming the public to believe that Billy Graham is a great man of God.
Graham has stood beside each of the Presidents and the Pope. The Illuminati don’t just program individuals, they program whole nations. The public has been led to believe in a television image. But what if the secular media’s image of Billy Graham is not real? For Christians it means that they can quit trusting in a man, and place their trust fully on God. For secular readers, they can begin to see the extent of how America’s institutions have been corrupted by the horrible trauma-based mind-control. The heartbeat
of the Body of Christ is crying out that something is terribly wrong. We will address that. All of us, whether Christian or not, must step out of the lies and look clearly out into the darkness and see every facet of this evil mind-control. When men who worship the god of this world place “In God We Trust” on the Federal Reserve bank notes, we who know the truth must step out of our dream world and realize that they mean Lucifer. (By the way, the Federal Reserve is not a government agency, but a private banking institution of the Illuminati. This has been documented in a number of writings.) The issue at hand in this
next section is to show how the institution called “the Christian church”, and the world in general has been deceived by a programmed multiple and this trauma-based mind-control. Secular readers will be shown that the doctrines that Christians want to believe in, have been subtly destroyed under the disguise of building them up. This is no different than the destruction of the positive values which hold any group together. (After the repeated colloboration by essentially all the Christian churches worldwide in many
activities as the NCC, the Billy Graham Crusades, the Promise Keepers and other programs, the Christian churches, Orthodox, Catholic, Protestant & non-denominational can be considered one institution.) The infiltration and control of the Christian religion has been one of the easiest tasks of the Illuminati. The Christian churches are what the intelligence agencies called “SOFT TARGETS.”

Billy Graham’s son tweeted a picture from the child trafficking front, Voodoo Doughnuts hours after a victim who was currently being threatened came forward exposing it again after it was previously busted by the FBI as a child prostitution racket.

Franklin Graham is president and CEO of the Billy Graham Evangelistic Association (BGEA) and of Samaritan’s Purse, an international Christian relief organization. [8]

Billy Graham could have been a Monarch slave himself, is Franklin?

[10] Mind Control 1 – The Mechanics of Mind Control – Tools for the Awakening https://www.youtube.com/watch?v=127BR5b8Hm4

This is all written in good faith but if there is anything that needs to be corrected or you wish to write to me please email grahamaug2018@cathyfox.33mail.com quoting the article title