The Secret Side of Halloween

Halloween maybe thought by some to be a fun event with dressing up and sweets but there is a sinister side to this day.

Halloween is a celebration observed in a number of countries on 31 October, the eve of the Western Christian feast of All Hallows’ Day.

In the ancient Celtic festival of Samhain, people would light bonfires and wear costumes to ward off ghosts.

The Celts, who lived 2,000 years ago in the area that is now Ireland, the United Kingdom and northern France, celebrated their new year on November 1.

This day marked the end of summer and the harvest and the beginning of the dark, cold winter, a time of year that was often associated with human death. Celts believed that on the night before the new year, the boundary between the worlds of the living and the dead became blurred. On the night of October 31 they celebrated Samhain, when it was believed that the ghosts of the dead returned to earth.

By 43 A.D., the Roman Empire had conquered the majority of Celtic territory. In the course of the four hundred years that they ruled the Celtic lands, two festivals of Roman origin were combined with the traditional Celtic celebration of Samhain.

The first was Feralia, a day in late October when the Romans traditionally commemorated the passing of the dead. The second was a day to honor Pomona, the Roman goddess of fruit and trees. The symbol of Pomona is the apple, and the incorporation of this celebration into Samhain probably explains the tradition of “bobbing” for apples that is practiced today on Halloween.

In the eighth century, Pope Gregory III designated November 1 as a time to honor all saints.

Soon All Saints Day incorporated some of the traditions of Samhain. The evening before was known as All Hallows Eve, and later Halloween. Over time, Halloween evolved into a day of activities like trick-or-treating, carving jack-o-lanterns, festive gatherings, donning costumes and eating sweet treats.

The Celtic festival may indeed derive from even further back in time to the Egpytians or even the Sumerians.

Nowadays it is seen as a commercial event. One quarter of all the candy sold annually in the U.S. is purchased for Halloween.

However for the Luciferians, Satanists, Illuminati who carry out ritual sexual abuse, this is a time to indulge in their disgusting nefarious practices which include abusing children in their rituals.

Luciferians, Satanists and Illuminati are unfortunately in positions of power all over the world, and there are many of them. Illuminati alone in the US being about one in a hundred people.

See also Reina Michelson  THE PAEDOPHILE AND SATANIC NETWORK IN AUSTRALIA INVOLVING GOVERNMENT OFFICIALS, LEADING POLITICIANS, TELEVISION EXECUTIVES, TOP TV PRESENTERS, AND THE POLICE. A MUST READ BECAUSE THIS IS HOW IT WORKS ALL OVER THE WORLD [6]

The Halloween rituals by the Illuminati may last from 29- 4th November, see  DeprogramWiki Ritual Holidays [2]

The following is a post from Fiona Barnett and illustrates this ugly side to Halloween.

The Secret Side of Halloween Original post on this link [5]

Halloween is not about dressing up and eating sugar. Halloween stems from an ancient Luciferian ritual which is still practiced all over the globe today. The focus of the Halloween Ritual is child murder.

Here are some drawings I did following my therapy session in which we focused on my childhood experiences of Halloween.

My trauma therapist felt vicariously traumatized by my description of these rituals, and stopped the session short. He said he couldn’t process any more images in his head.

I commented: “How do you think it is for me, on this side of the couch?”

(pictures will not enlarge on clicking) 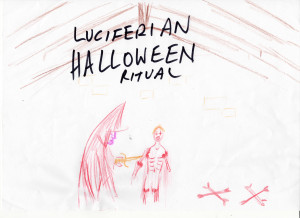 So, do you still feel like eating candy? My therapist doesn’t.

[6]  Reina Michelson  THE PAEDOPHILE AND SATANIC NETWORK IN AUSTRALIA INVOLVING GOVERNMENT OFFICIALS, LEADING POLITICIANS, TELEVISION EXECUTIVES, TOP TV PRESENTERS, AND THE POLICE. A MUST READ BECAUSE THIS IS HOW IT WORKS ALL OVER THE WORLD https://dochub.com/markmywords/yRqk6a/the-paedophile-and-satanic-network-in-australia-involving-government-officials

This is all written in good faith but if there is anything that needs to be corrected or you wish to write to me please email cathyfox@zoho.com quoting the article title

9 Responses to The Secret Side of Halloween