The Department of Education have released a redacted copy of the Final Report of a “Pilot Study on Alleged Organised Abuse” authored, in approximately 1994, by Dr Robert Hale and Ms Valerie Sinason of the Portman and Tavistock Clinic.

There is a link to a pdf download here [11] of a searchable copy [HT daedalus – Operation Greenlight [13] ] original non searchable here [2] It is also reproduced below in a series of jpgs.

The study was not actually commissioned by the the Department of Health but was partly funded by them for one year. There was no active decision not to publish [10] [App1]

The research was started as there had been an increasing number of referrals to the Portman Clinic and other NHS trusts and professionals, since 1992, for consultation, assessment and treatment of children and adults alleging involvement in organised ritual abuse particularly of a satanic context.

In this pilot study states of extreme terror, flashbacks, trance states, self harm, and narratives including non consenting sexual acts, sadomasochism, paedophilia, necrophilia, bestiality, torture were complained of. There had been increasing disclosure by children of organised ritual abuse. Clinicians were being affected by the stories and patients were left without treatment.

Very small numbers of these cases were entering the court system due to prevailing current views, and lack or corroborative evidence or of establishing the validity of that evidence.

This Hale and Sinason research involved systematically cataloguing cases referred to the Portman Clinic over one year that involved allegations of organised ritual abuse. Clinical assessment was offered to all referrals and corroboration sought, and a sample were offered further in depth forensic investigation. Altogether 50 referrals were made.

Organised ritual abuse was carefully defined as sexual abuse were there was more than one abuser, acting in concert, where there were allegations of ritual associated with the abuse. Satanic abuse is merely one form of ritual abuse where the belief system involved in the abuse was Satanic. Various cases were excluded t0 minimise bias and to weed out cases where paedophiles might have tricked children to cover paedophilia with ritual activity

Regardless of the belief system the study catalogued allegations and high percentages of murder, necrophilia, abortion, bestiality, impregnation, cannibalism, ingestion of bodily fluids, non consenting sado-masochism, killing and torture of animals, ritual apparel and instruments and induction of trance states.

However only two of the 50 study cases got to court

The people making these allegations formed a discreet group and significant clinical group based on dissociation, affective state of patient when recounting, consistency, and were non discountable as a product of mental illness. 8 out of 18 were dissociative and 33 from 50 had PTSD symptoms.

If you were a victim of ritual satanic abuse, you would stand little chance of getting to court due to a variety of factors including bias.

More research was and still is needed on the whole issue of ritual abuse. Ritual abuse happens according to Fontaine, Gallagher and Hale and Sinason. The only dispute is how much.

Final Report of a “Pilot Study on Alleged Organised Abuse” 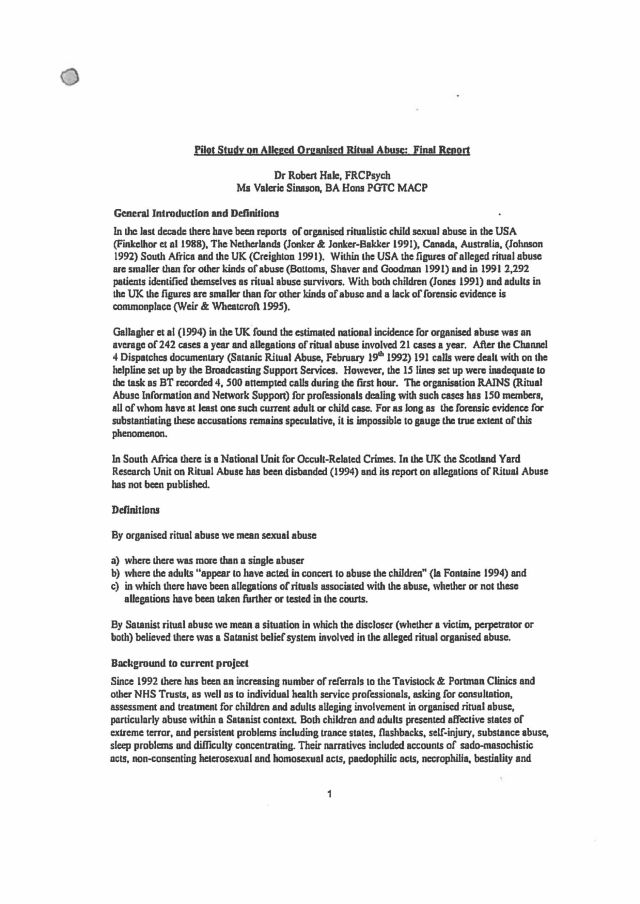 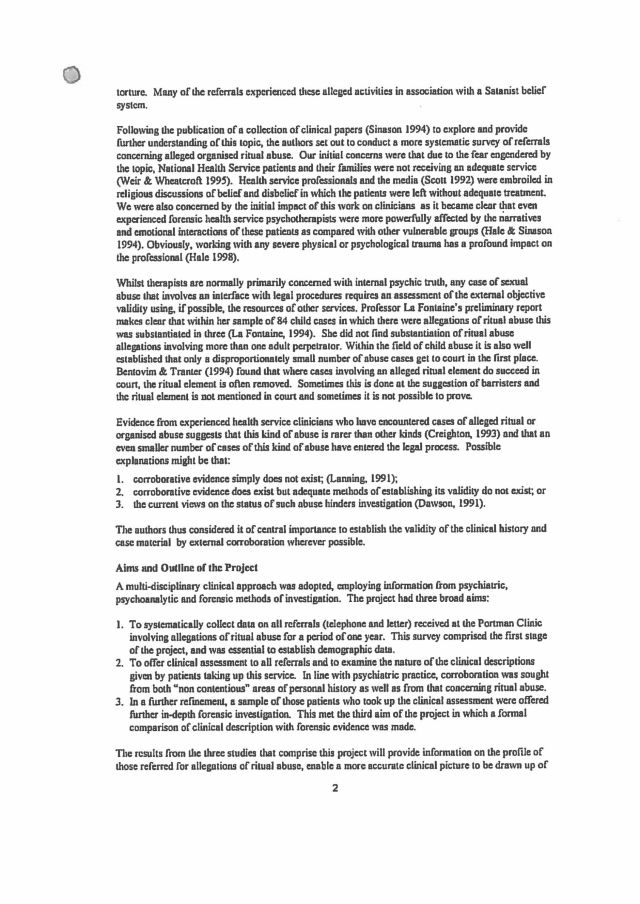 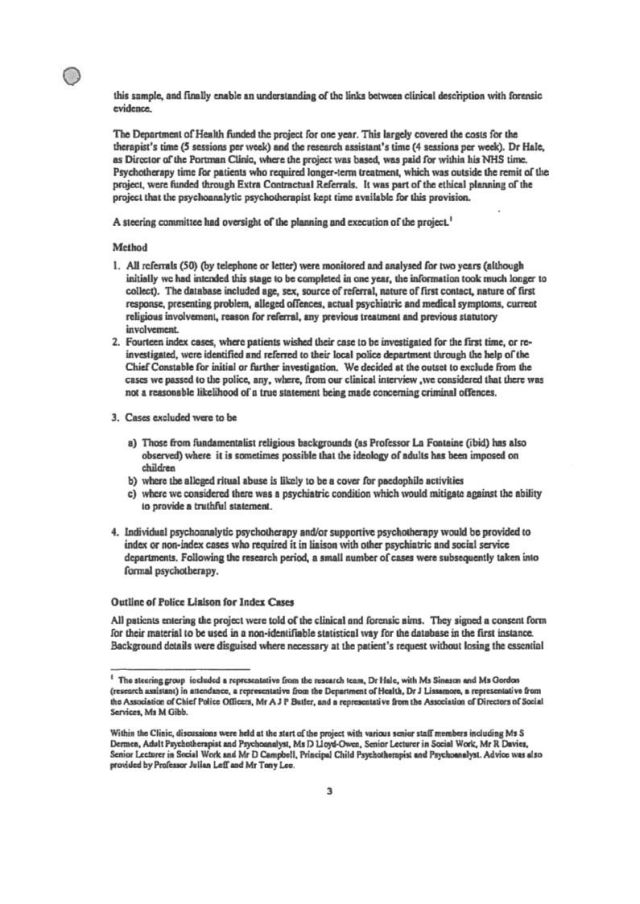 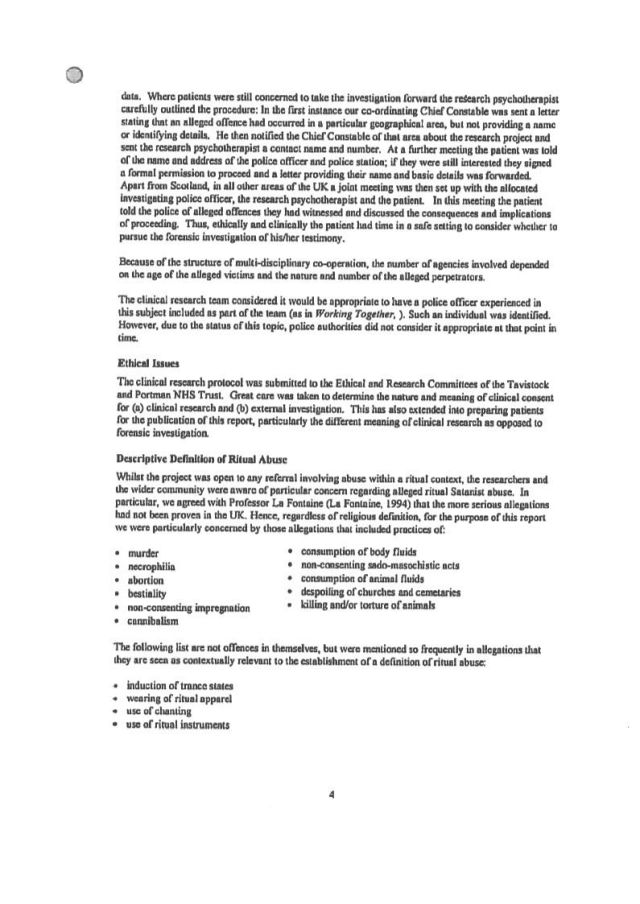 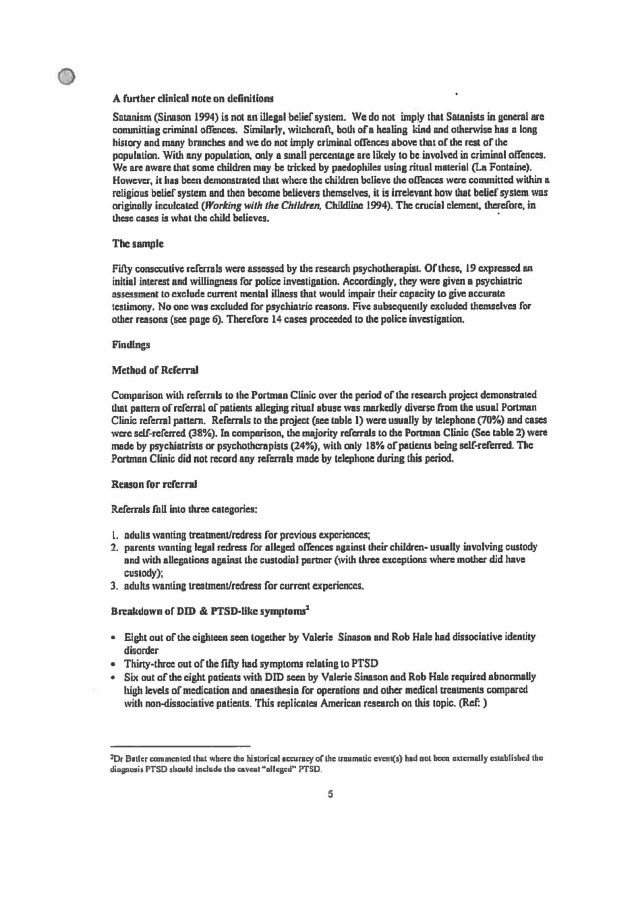 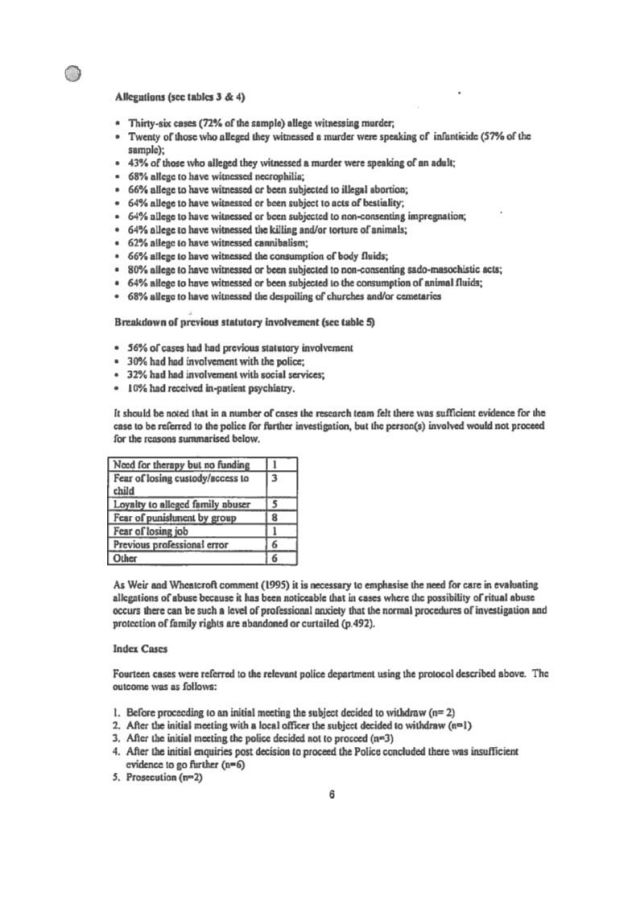 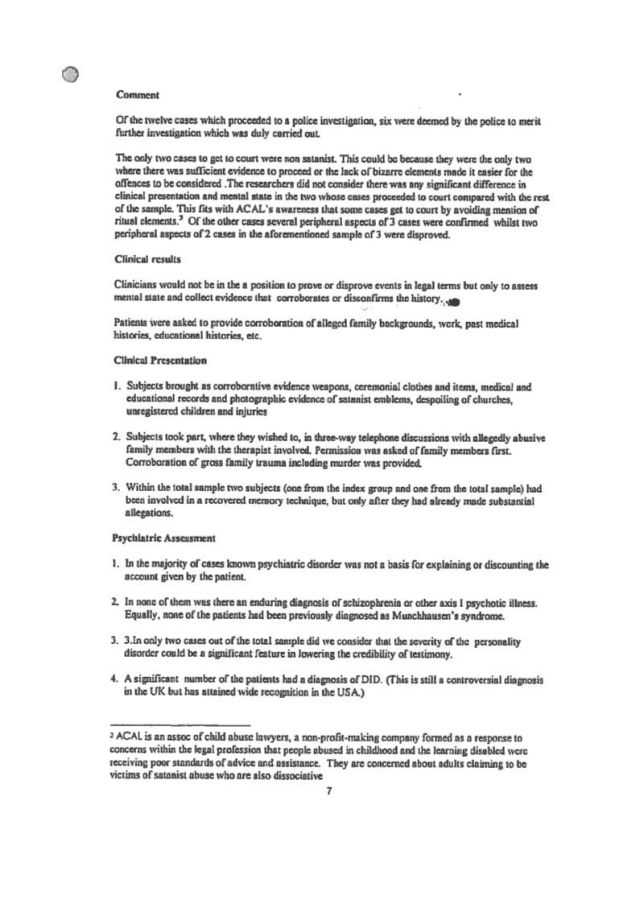 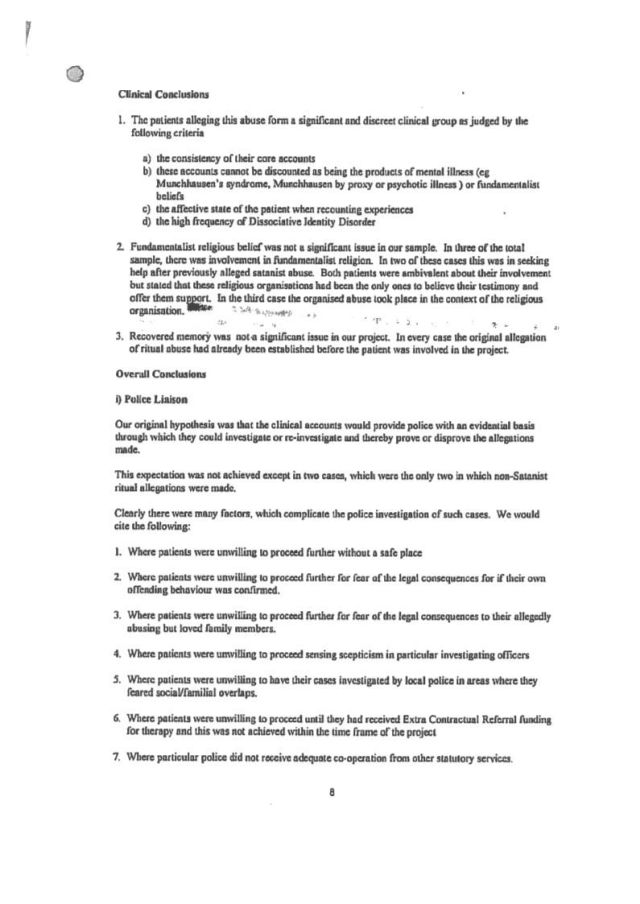 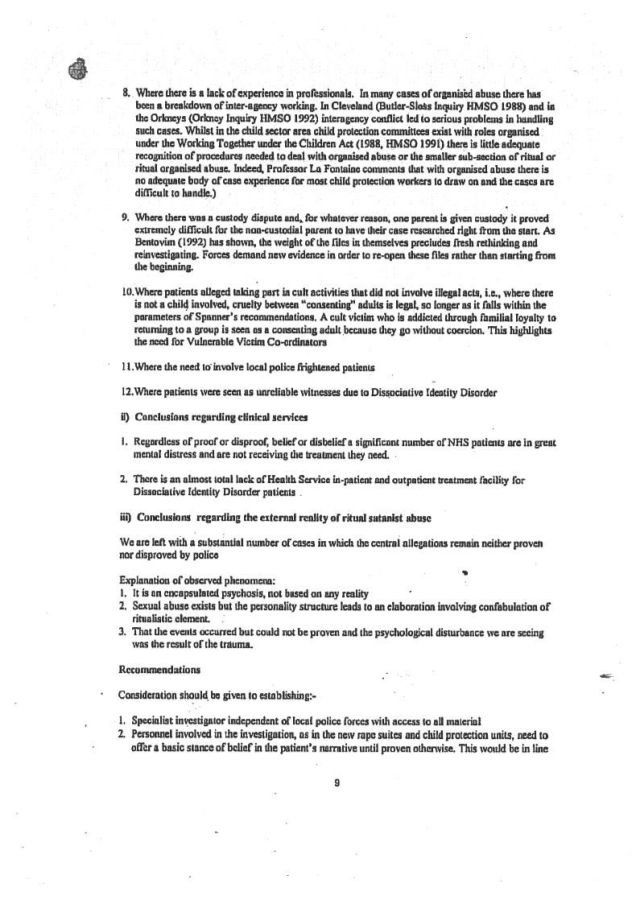 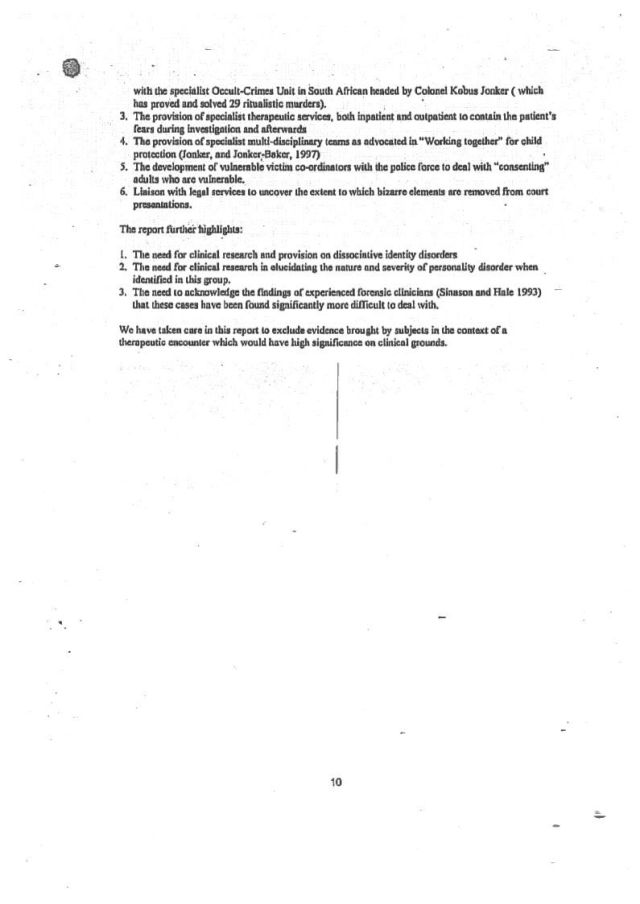 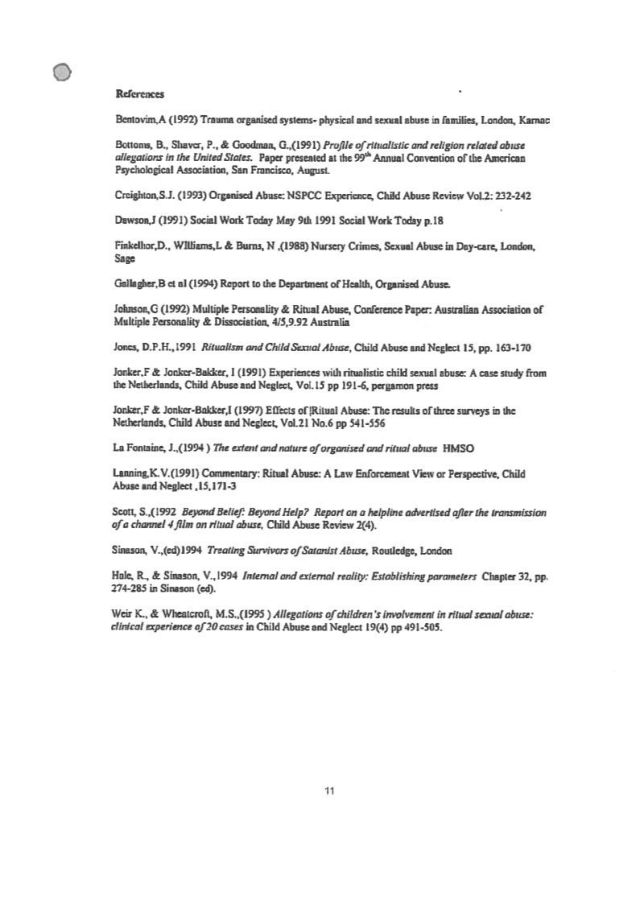 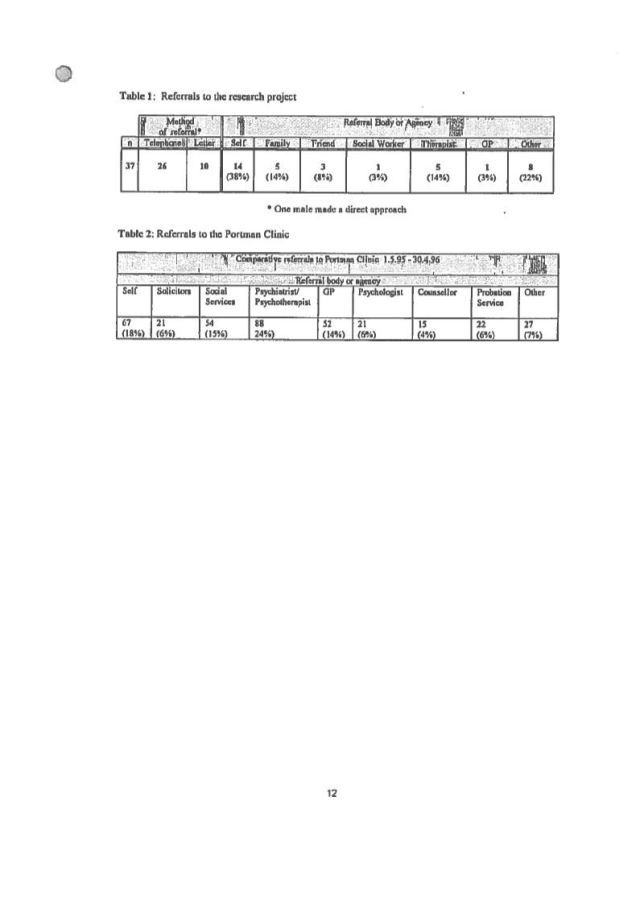 DOED said As the redactions are not apparent in the above version, I will mention
them here.  At the bottom of page 10 there were 2 short paragraphs about
an ‘example’ (case study); and there were 4 pages of tables (pages 13-16)
at the end where, though patients were not named, there were codes for
each patient that might have enabled identification.  Given the
sensitivity of the issues, we believe the ‘personal data’ exemption is
appropriate.

[4] SAFF Tony Rhodes THE CURSE OF THE SATAN MYTH HITS THE INDY http://saff.nfshost.com/indyhoax.htm @safftweets SAFFs main concern appear to be that ritual abuse is not blamed upon satanist. It has pages of exposure of the church, which is not disputed

[8] 2001 Sara Scott The politics and experience of ritual abuse Beyond disbelief https://www.mheducation.co.uk/openup/chapters/0335204198.pdf

[13] 2016 Jan 13 Discussion on suicide with Dr Robert Hale https://m.youtube.com/watch?v=fZq6xGrB8hY Robert Hale, psychiatrist and psychoanalyst who worked at The Tavistock and Portman Centre discusses the conversations he had with 1000 people over a period of five years who had all made an attempt on their lives. He spoke to them at soon as possible after their suicide attempt and he discusses here what they told him. 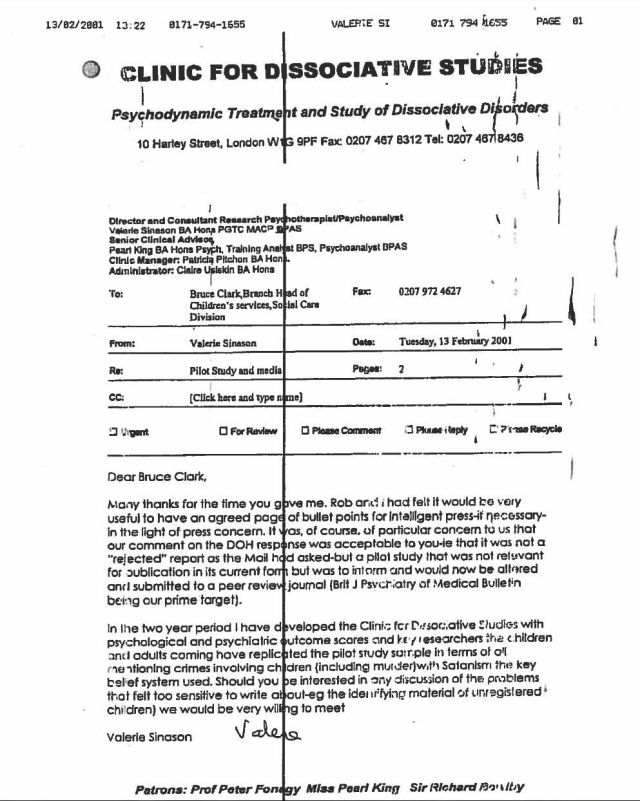 This is all written in good faith but if there is anything that needs to be corrected or you wish to write to me please email haleAug2017@cathyfox.33mail.com quoting the article title