John McCabe, courageous survivor of abuse at Medomsley, has asked me to publish the new Police Complaints authority’s decision on his complaint against Durham Police, which of course I am very happy to do.

Essentially they cover the police’s back, as this letter shows.

In the links at the end are the latest press articles I am aware of, please feel free to add any more to the comments section. For the latest information on the Medomsley situations check the Monster of Medomsley website [4] Survivors contact Trent @RandolphTrent on twitter

Update 29th Jan 2018- Trent validly points out that “It maybe worth a mention that if throughout these matters at hand, there was an ongoing cover up of information, facts, truth throughout the time of Medomsley & subsequent investigations, neither the Police IPCC or IOPC can use ‘Time barred issues’ as fraud has been established!! 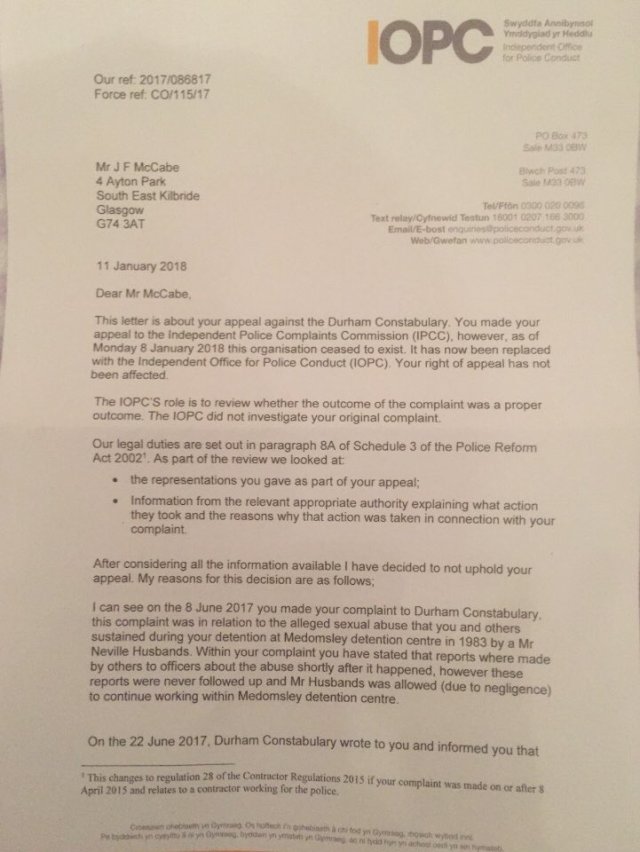 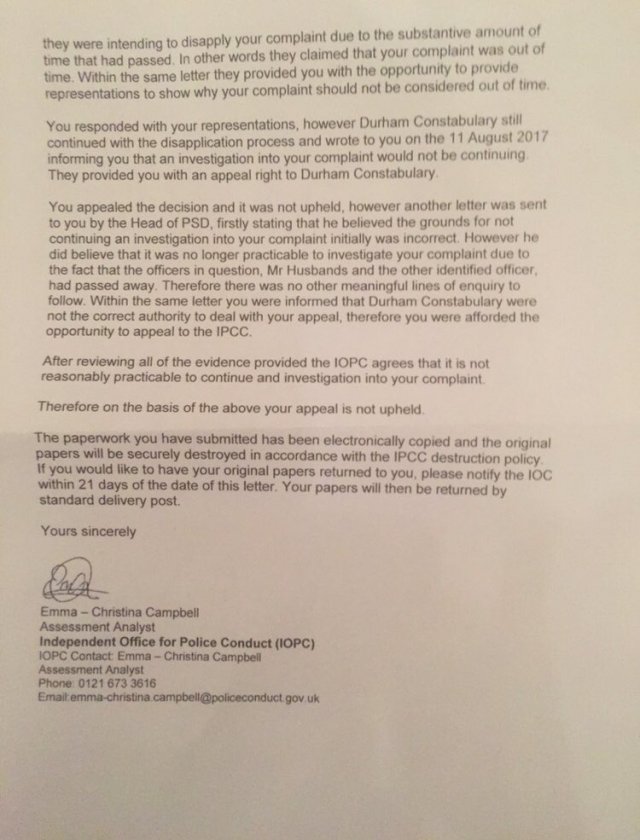 (formatting errors are mine, due to transferring from different format)

Prior To The IPCC Being Disbanded On 7th January 2018.Probably Due To Not Being Fit For Purpose !Complaints Are Now Dealt With The IOPC 🤥

The Complaints System is Set Up So That You’ll Tire And Give Up.When Making Complaints Against Any Force You must Firstly File Your Initial Complaints To The Force Who You Are Complaining Against !

Then They Will Try and Wear You Down, Giving You Impossible Timescales with Regards To Forwarding Them Documentation.

Within The OIPC Letter it states 5 Police Officers Who Dealt With 5 Medomsley Complainants at Durham Constabulary Are Now Dead Which Throws The IPCC and Durham Constabularies Claims That 4 Of The Officers Could Not Be Traced Into doubt and perhaps into Conspiracy To Pervert The Laws of Justice.

✊🏼 Until My Last Breath I will try and Get Justice For Both My Fellow Victims From Medomsley And Myself Which Will Inspire Others, Not To Give Up ✊🏼

Up to 17 former custody officers could be charged with sexual abuse and other crimes after a police investigation into Medomsley Youth Detention Centre in Consett, Co Durham, involving more than 1,500 victims. 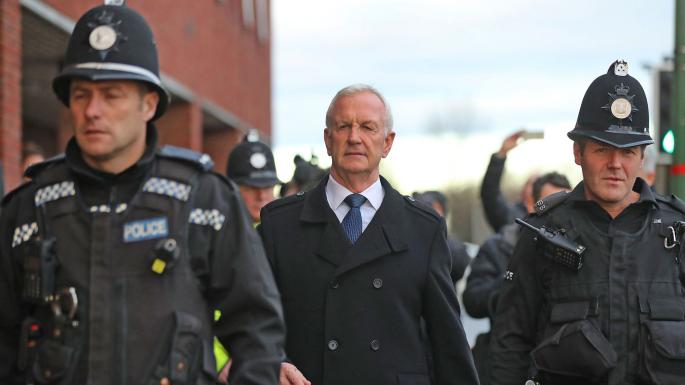 The Sunday Times understands the Crown Prosecution Service is preparing to issue “multiple charges” against the suspects by March, after one of the biggest investigations into abuse at a state-run facility seen in the UK.

Operation Seabrook has involved dozens of officers — thought at one point to be up to 100 — looking into mass complaints of abuse committed at Medomsley in the 1970s up to 1988.

The investigation has uncovered evidence that 14 boys had reported abuse at Medomsley to police officers immediately after they left the centre. One officer alone took complaints from five separate boys. It is thought that no action was taken.

The independent inquiry into child sex abuse, set up in 2014 to look at abuse of children in care, is examining how the “scale of abuse” at Medomsley could have gone “undetected for so long”.

John McCabe, 52, who was abused at the detention centre by a guard and whose campaigning work helped to trigger the inquiry, said: “The police at the time knew about the abuse going on. Some of those complaints are before I was sent to Medomsley.

The detention centre, which closed in 1988, was used for teenage offenders who had typically committed minor crimes. The boys, aged 17-21, were usually held for six to eight weeks.

Separately, officers have been investigating a suspected paedophile ring operating at the establishment centred on the notorious Neville Husband, who was in sole charge of the kitchens at Medomsley. He later became a church minister.

In 2003 he was jailed for eight years for committing sex attacks on five young Medomsley inmates from 1977 to 1984. His sentence was increased to 10 years in 2005 after new victims came forward and he admitted attacks on four more boys. Police believe the true number of his victims could be in the hundreds.

Paul Goundry, the former senior investigating officer for Operation Seabrook, wrote to one victim, saying: “Husband took numerous inmates off site to be abused by others. I believe this was a paedophile ring and that those involved could have come from a number of associations that Husband had.”

Husband’s former colleague, Leslie Johnson, a storeman, was also jailed for six years in 2005 for sexual offences. Both men have since died.

Detective Inspector Andy Smith, of Durham constabulary, said Operation Seabrook was one of the largest investigations of its kind in the country.

In another development, seven men have been charged with misconduct in public office and physical abuse. Some have been charged with sexual abuse. Their trial is due to start at Teesside crown court in September. They are Christopher Onslow, 71, Brian Johnson Greenwell, 70, Alan Bramley, 69, John McGee, 73, Kevin Blakely, 65, David McClure, 62, and Neil Sowerby, 61.

When McCabe was sent to Medomsley it was designed to be a “short, sharp shock” for stealing two rings from a pawn shop. He got a job in the kitchens, but faced abuse and rape by Husband. “I want to see justice for everybody who went through hell at Medomsley,” he said. “We will never forget.”

Anyone who believes that they are a victim and has not already contacted the police should email operation.seabrook@durham.pnn.police.uk

This is all written in good faith but if there is anything that needs to be corrected or you wish to write to me please email mccabeappealjan2018@cathyfox.33mail.com quoting the article title