For some time I have followed the symbolism that many Hollywood stars and others use in their performances, public appearances and tweets.

I produced this thread of tweets with links, so people could learn about the symbolism and it proved quite popular. It is a good subject to introduce people to the rabbit hole of abuse and mind control as the symbols are everywhere in videos, concerts, awards ceremonies, magazines and social media.

The thread is actually 30 tweets long but it is broken two or three times by twitter (as they do), so it will not thread together in @threadreaderapp unfortunately. You can read the whole thread via twitter but you have to look at the replies after the breaks eg sometimes it breaks at 15, sometimes 25.

I will try and get round to composing another, not only due to the breaks, but looking back it is quite naive, as I have learned more about the symbolism which is more in depth than I realised at the time. However the thread is a good place to start, learning the messages. We need to learn their comms.

1. Thread on Illuminati Symbols – for those not familiar with it, perhaps look on it as a pictorial language that when you learn it, reveals hidden messages. First post is the Illuminati Ball 2018 in New York https://t.co/btqlYR8OMU #Illuminati #IlluminatiSymbols #Rothschild pic.twitter.com/E0uc0hMdZt

When I produced that thread I was only aware that this was symbolism or cartel signalling and did not realise there was far more detailed information carried by the signalling than I had previously thought. So this post is a more in depth study of the illuminati signal “code”, which they openly use, hidden in plain sight.

I am sure this just scratches the surface and I hope anons and others will analyse the symbolism more, and carry this research on. These people, mainly mind controlled victims, many born into the illuminati, are made to signal the intentions of this powerful cult.

Now is a good time to follow it in real time, as the cult signals over the upcoming weeks as they ramp up the mass panic and trauma about the corona virus, and have their satanic big time coming up between April 19th to May 1, which includes Baal week, blood sacrifice to the beast, and Beltane and this year a special one off. 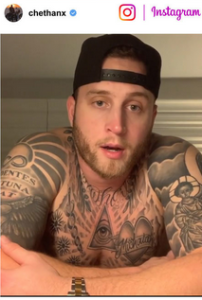 Chet Hanks, blatantly sending illuminati picture signals as he talks about Tom Hanks’s positive for coronavirus, whilst topless. Was this really necessary?

Is Chet linking the coronavirus to the illuminati? Certainly they are making use of it to ramp up the mass trauma and panic, even supposing they were nothing to do with the release of coronavirus.

If hand is pointed down and straight at someone it signifies a curse toward that person.

Next, watch the thumb – If thumb is in front of two fingers it means just normal devil horns, and is considered a hail to Satan.

If thumb is behind two fingers, it is the Pan sign signifying child sex ritual. Pan or the Piper is often used as a symbol of luring children into the woods never to be seen again. This symbol often used for the ritual hunts, victims raped and killed. 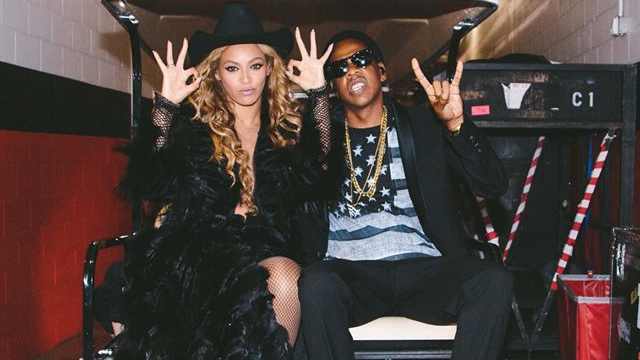 Beyonce’s hands means it is a message to “all illuminati”

JayZ – notice thumb, it’s slightly behind, so it is pan sign, meaning there will be hunt parties.

The “El Diablo” hand sign often is con-fused with the deaf’s signing of the phrase, “I love yo

NOTES
ASL "I Love You".
Created by Hellen Keller, an Occultist.

UofT HOOKEM HORNS
Ever think maybe they were DUPED into hailing SATAN
/1 pic.twitter.com/1iSVB46KM7

This one is the signifier for cryptic masonic rituals which may include higher esoterical levels like Golden Dawn, Skull and Bones and Rosicrucians.

Call to ritual after events or coming up.

Of course, as they do, they have a cover story that it is a ROC sign, Jay Z record label.

➡️ [THE ROC]
Created by making an EQUILATERAL TRIANGLE with both hands either infront of yourself or above your head.

➡️[INVERTED ROC]
Same triangle but made AT THE MIDLINE and Below (Angela Merkel).

Powerful person in the Illuminati Hierarchy.

This is where the messages get deeper. What I previously thought was just a 666 sign, actually is far more nuanced, deep and disturbing.

This should not be confused with OK sign, or the circle game, or white power sign. Context and common sense are key to distinguish.

To decode, note the exact position of hand and fingers. The rules of signalling appear to be something like this

This below is what is meant by slightly bent or backwards, and notice tilt of wrist into back position

Fingers back…this would indicate only that quadrant, so for above pics, only east quadrant. 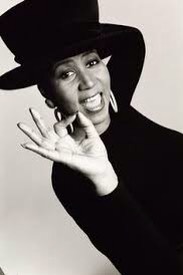 Fingers back, so this would indicate only that quadrant, so for above pic, only West quadrant

This one above, Emma Watson, means rituals in North and West quad (fingers straight up, right eye) 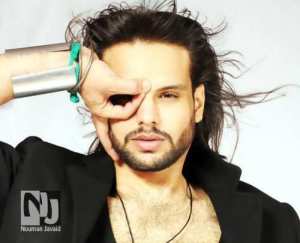 Fingers down – South, and fingers bent and so it is only South quadrant.

Since middle finger is prominant it is likely a specifically a call for those considered of Wind Magic status.

Here Madonna shows two hands, one higher and other lower. This  means South quadrant. Fingers pointing up so means North quad included.  Bottom hand pointing down it means only the north and south quads. Note also the number symbolism. 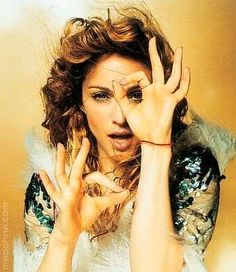 Bottom hand the fingers are up it means all quads having a meeting.

Depp’s fingers are bent and on the right side from picture view means only the East quadrant is having rituals. Being a vampire, it also means vampire rituals.

Di Caprio’s fingers are straight(ish) which means the North, and hand over left eye as we view it, so North and West quadrants will have rituals.

However Di Caprio is using his middle finger to make the circle. Di Caprio’s two fingers touching face is a call sign to do away with the male escorts. So whoever is doing the trafficking just got an execution order, they will use sex slaves in north and west and get rid of the handlers and slaves when done. 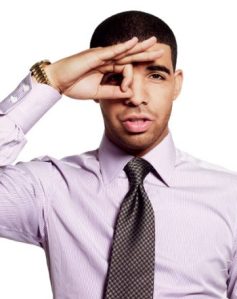 Salute means specifically all military / nazi satanists to be present at the rituals; from East only as fingers point East.

Dion is showing a cancellation (two fingers), because she has two sets of two fingers, it means rituals in North and East are both cancelled.

Notice her index and third finger, they are in a v shape or scissor shape but not straight like Di Caprios were. In this one she is cancelling ritual and sex slave order, specifically earth and wind magic individuals from the North, and fire and water individuals from East. The West quad would have been the ones in charge of ritual since hand is on right side of her face. The two fingers (index and third finger in this position) is the Masonic sign for “Do not proceed forth”. One finger point with arm bend up like Celine’s means “Proceed”.

NOTE
When talking, many people perform this hand sign out of habit & NOT as reference to SATAN (666)

Flat hands can indicate sex slaves or certain monarch sex slaves, but it can be like a call back or summons to certain trained monarch slaves. If hands are flat against face it deals with sex slaves or cancellations. All directions still apply.

Quadrant based on side of face and direction the fingers point.

Above means all from east (hand on east side of face), and destroyers (lightning bolt)  from west (bolt on west eye). This means west destroyers will kill the ritual victims from east for that ritual.

This specifically speaks to sisters of light. These symbols are summons, who is being summoned and to where.

There are 13 sisters of light for each quadrant, in US and international quadrants. They are the Elite Security team, spiritual protectors, demonic possession, and spiritual warfare – disease and causing money problems etc see [2] 2020 Jan 18 cathyfox blog The Five Child Trafficking Networks of the Illuminati

They are only women. If a man is doing shhhh sign, it deals with Masonic code of silence. 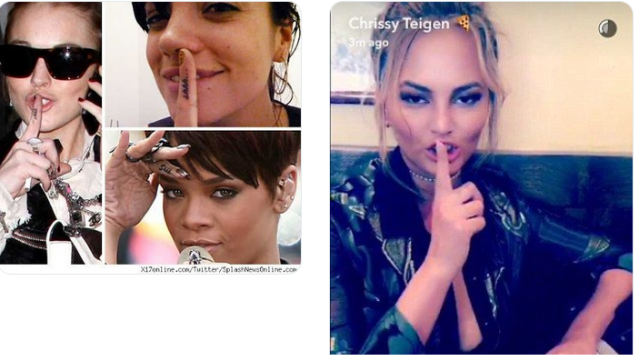 I am not sure of the nuances on this signal, whether it is important where the end of the finger is in relation to the mouth etc. Hopefully an anon can work it out.

More examples of the signs here

➡️ [SHHH]
It's the SHHH or HUSH hand sign.
Index finger placed vertical to the lips.

MEANING
Shush…We have a secret we don't tell.

The SHHH hand sign used by Illuminati Luciferians is probably the most popular. Its easy to hide#TheGreatAwakening 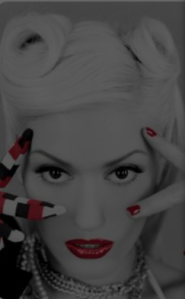 This a beta kitten monarch program call, meaning they will be programming. I dont know any more about these signals, except that the tilted two fingers is sign signalling for two male escorts, comparable to a handler code.

Anyone in the illuminati can be used to send signals.  Most of the time the handler for the celebrity is the one directing them in poses. The majority may not  know what they are sending.  Their handlers tells them when and where to show up.

So messages are particularly for the unknown “elite” who walk among us living regular lives. These people see images on a magazine cover and are subconsciously triggered.  Individuals can go to bed, then wake up, like sleep walking and attend these events. They do not know in the morning when they wake up that they have even been involved and go about their daily routines.

Also check out satanists tweets, they communicate openly on twitter, it would be interesting to know if they use Facebook and Instagram also, if anyone is on those platforms.

Also check the emojis they use.

Devils horns hand sign, purple devils head, key and lock, chain are used as well as a black heart and no doubt many more.

The key in masonry indicates the code of silence.

Signals are given often on magazine covers, and further information on the place and time are gleaned by more signals. So these signals are going on very often, which when pieced together reveal the time date, place, and who is to attend and what they will be doing.

The events that everyone attends are the ones Satan usually appears at as well. They occur four times a year. So all the high level Illuminati are summoned to appear in one place. Magazine cover will reveal place.

We must Learn their comms…

Thanks to those who helped.

[1] 2013  John of the Gentiles The Satanic States of America

This is all written in good faith but if there is anything that needs to be corrected or you wish to write to me please email cathyfox@zoho.com quoting the article title.