Gyles Brandreth took over as MP for the City of Chester seat from Peter Morrison at the April election 1992. He was selected for the seat in March 1991. 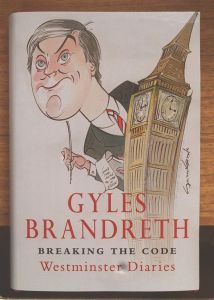 The following entry is 12 Sept 1991 by which date Brandreth is under no illusions as to what some of his prospective constituents think of Morrison- a disgusting pervert into little boys. 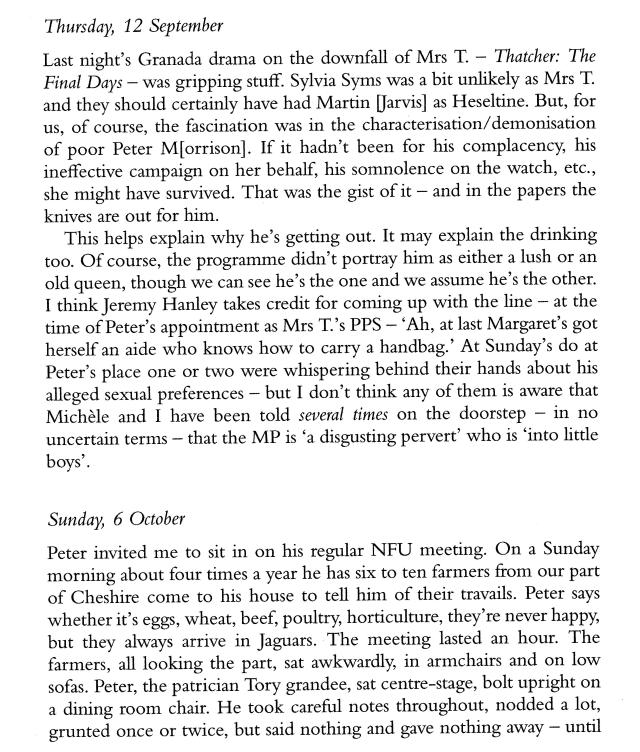 Since this edition, first published in 1999, Brandreth has updated the book in 2014 to add that he himself was a victim of child sexual abuse and also that he did not know the veracity of the allegations against Morrison. He also states that he does not know if there was a cover up, but he suggests whips do look after their own. [2]

It does not mention Brandreth going to the police either in the 90’s or recently. Perhaps it is time to state what he knows, and for the police to be proactive, as well as to be given correct finding and resources for the job of investigating child sexual abuse.

It is worth pointing out that Morrisons sister, Dame Mary Morrison, was a friend and lady-in-waiting to the Queen [3]. His father John Morrison was a Lord Lieutenant of Wiltshire for many years [4]. I believe that Thatchers rise to leader was helped by Morrisons father, but I have not at present got a reference for that. [Though see some of links found by @snowfaked]

For more on Morrison see Desiring Progress excellent post “Peter Morrison and the cover-up in the Tory Party – fully updated” [5] and more references in the links mostly provided by @snowfaked that are food for thought and may be useful in future research.

[2] 2014 Sept 12 Daily Mail ‘I was abused by my choir master’: In a brave and haunting account, TV star and ex MP Gyles Brandreth reveals the years of abuse he endured at prep school http://www.dailymail.co.uk/news/article-2754017/I-abused-choir-master-In-brave-haunting-account-TV-star-ex-MP-Gyles-Brandreth-reveals-years-abuse-endured-prep-school.html

5 Responses to Brandreth on the child abuser Peter Morrison MP