This article is to briefly link together a couple of articles and various court appeals surrounding the Bristol abuse network that Nigel Tucker  was associated with. I will probably add to this, but wanted to get the links out quickly for other researchers.

Tucker is reported recently, Oct 3, in the Mail, to be facing extradition from South Africa for child sexual abuse offences [2]. Tucker absconded on 2 Oct 2000 [3].

The original story about the Bristol abuse network, was written up by Nick Davies in October 2000 [1]. The Police Operation involved was Operation Panorama, then Operation Parallel [1].

What is clear is due to Home Office targets and hence lack of money and resources, prevented investigation of child abuse, and many of the 60 suspected child abusers were not brought to justice [1]. This is shameful.

1979 May to July, 1981, the Appellant was a tenant but probably subletted as  landlord a premises above a launderette in Tottenham High Road [5]

1996 Two more boys made allegations about the house [1]

1998  Feb 3 , Avon and Somerset Police finally opened the door at 49 Churchill Road to find it sanitised [1]

Now, Rob Jones had a full-blooded investigation. But he was running it out of a shoebox. He needed more detectives to carry out interviews; he needed an incident room with a computer system with HOLMES software for major inquiries and he needed admin officers to run it. But all he was given a single terminal and a part-time inputter. Why would the Child Protection Team need an incident room? At least one senior officer was actively arguing for the whole inquiry to be stopped immediately.[1]

Behind the scenes, senior officers had now made up their minds to pull the plug. They had appointed a new chief inspector to run the Child Protection Team and briefed him to stop the job before it got any bigger – no more arrests, no more fresh inquiries. That was it. At this point, Jones’ team had two strokes of luck. Ian Appleton fought this.

1998 Jun Operation Panorama started [1] ‘Operation Panorama’, a large-scale investigation by Avon and Somerset police into paedophile activity in the Bristol area between 1985 and 1997 [4] led to series of cases in the Crown Court at Bristol before His Honour Judge Dyer, the Recorder of Bristol, which involved some eleven defendants and a consolidated indictment containing some 83 counts [4]

For senior officers at Avon and Somerset police, the big problem was the Home Office, who now steer police activity with a list of “best value performance indicators”, on which each force is judged. There are 37 of them. They deal with recorded crimes and domestic burglaries and violent crimes and drug-dealing; they cover efficiency-savings and complaints and ethnic balance and 999 calls. But there is nothing anywhere in any of them about child abuse. By diverting resources into Operation Panorama, Avon and Somerset was risking its corporate neck with the Home Office and HM Inspector of Constabulary. [1]

Gay and Tukcker prioritised due to lack of resources. Alan Williams would have had the same priority, but he had escaped justice, by dying in a mess or heroin and AIDS during delay. The dozens of other suspects were put on the back burner.[1]

1999 Dec By December, every defendant either had pleaded guilty or had been convicted by a jury. The ‘big picture’ strategy had worked. Most of them were jailed – Christopher Leek for twelve years, Tony Stevens for eight. The judge commended Rob Jones and his team. [1]

By the time the trials were over, John Gay and Lee Tucker had been arrested, and the Panorama team were ready to gather more evidence on them and to get to grips with the long queue of up to 60 other suspects [1]

Six of their twelve officers were taken. They were already short of admin staff. Now they lost another and had to use a constable, who happened to be able to type, to input information into the computer. [1]

But the pressure from Whitehall was to focus resources on the 37 performance indicators. Senior officers regretfully told Rob Jones’ team that they must look for ‘an exit strategy’. In the meantime, the team was cut back. Six of their twelve officers were taken. They were already short of admin staff. Now they lost another and had to use a constable, who happened to be able to type, to input information into the computer.[1]

2000 Sept John Gay and Lee Tucker were tried at Swindon Crown Court. Gay was finally sent to prison for twelve years . Lee Tucker was jailed for eight years. Tucker, however, had been given bail so that he could be treated for the HIV virus and, three days before the jury’s verdict, he jumped bail and vanished. [1]

2000 Oct Nick Davies  Paedophilia is easy: how police finally caught up with a network of child abusers [1]

2000 Oct 4 Lee Nigel Tucker was convicted of 4 counts of buggery, 4 counts of indecent assault and 1 count of causing a stupefying drug to be taken with intent to commit an indictable offence. He was subsequently sentenced to a total of 8 years’ imprisonment.[3] 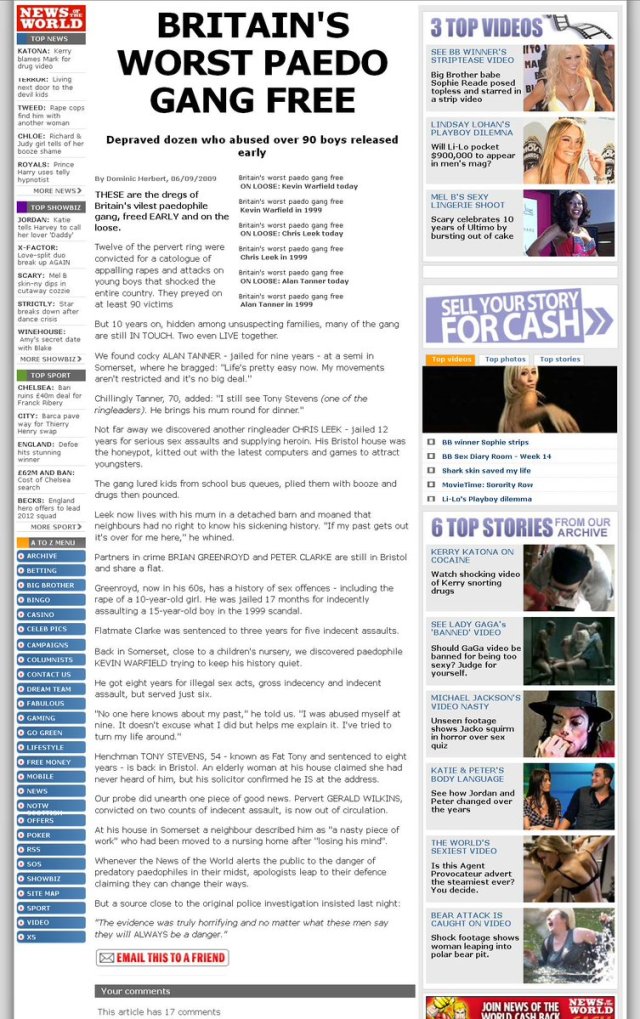 [1] 2000 Oct 1 Nick Davies website Paedophilia is easy: how police finally caught up with a network of child abusers http://www.nickdavies.net/2000/10/01/paedophilia-is-easy-how-police-finally-caught-up-with-a-network-of-child-abusers/

[2] 2016 Oct 3 Daily Mail British pilot facing extradition for sex offences on children as young as 12 is re-arrested in South Africa for ‘trying to remove his tag with a screwdriver’ http://www.dailymail.co.uk/news/article-3819373/Brit-helicopter-pilot-facing-extradition-sex-offences-kids-young-12-arrested-South-Africa-trying-remove-tag-screwdriver.html

[11] Index of Newspaper and Journal articles on this blog https://cathyfox.wordpress.com/2015/05/23/newspaper-stories-index-timeline/

[12] Index of Court Appeals EWCA on this blog https://cathyfox.wordpress.com/2015/05/08/a-timeline-of-court-and-ewca-documentation-on-cathy-fox-blog/

This is all written in good faith but if there is anything that needs to be corrected please email bristol2000@cathyfox.33mail.com